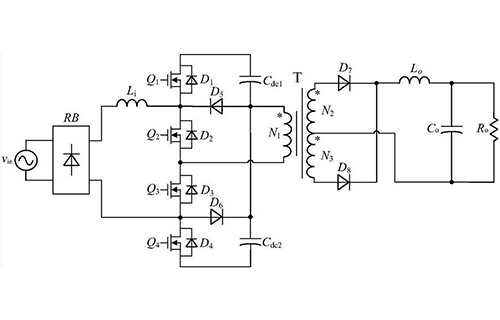 Compared with the traditional two-level three-level power consumption, the sine of the voltage waveform is good, and the harmonic content is low, so the grid-connected performance is superior, but it also has its own shortcomings, that is, the midpoint potential is unbalanced. It is precisely because of the fluctuation of the DC side voltage that the medium and low harmonic content of the inverter output signal is larger than before, which causes the quality of the waveform to decrease. The unbalance of the midpoint voltage will increase the current spectrum wave rate of the inverter output, resulting in increased loss and decreased utilization. If it is severely unbalanced, a capacitor with a large voltage drop will be damaged due to excessive voltage, and the power tube connected in parallel with it will also be damaged.

According to the electrical characteristics of the capacitor, the formula can be listed:

Suppose C1=C2=C, then according to the KCL law:

From equation 1), i0∝(du0/dt) can be obtained. When u0>0, i0 flows into the midpoint. Conversely, when u0<0, i0 is flowing out
point. It can also be said that i0 causes u0 to change. If i0=0, u0 will not fluctuate. For example, vectors 211 and 100. When the vector 211 works, C1 discharges and C2 charges; when the vector 100 works, C1 charges and C2 discharges. Table 1 lists the influence of redundant vectors on the neutral point potential balance. Therefore, by controlling the action time of the small vector, the fluctuation of the midpoint potential can be minimized.

The two capacitor voltages Uc1 and Uc2 are subtracted, and the difference is the change in the midpoint potential. A new variable p (-1≤P≤1) is defined by the difference. If the voltage of C1 is higher than that of C2, P is a positive value, otherwise P is a negative value. The time calculation formulas of Tup and Tdown are formula (2) ~ formula (4). The action time of the positive and negative small vector pairs changes with the change of the midpoint potential difference. For example, when Uref is in the position of Figure 3, Tup=T100, Tdown=T211. When p>0 (the voltage of C1 is higher than that of C2), the formula shows that the action time of T100 decreases and the action time of T211 increases, so that the voltage of C1 decreases and the voltage of C2 increases. During the switching period, the adjustment of the redundant small vector pairs can well suppress the fluctuation of the midpoint potential of the three-level grid-connected inverter and maintain balance