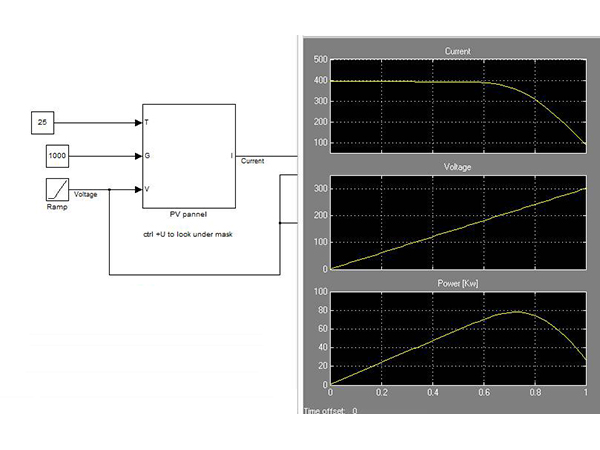 The basic principle of a solar cell is similar to that of a diode. It can be explained by a simple PN junction. Figure 1 shows the single model and appearance of a solar cell. When sunlight hits the PN junction, the atoms in the semiconductor are released due to light energy. Electrons, at the same time, correspondingly generate electron-hole pairs, so an electromotive force is generated between the PN junction. When the external circuit is connected, there is electrical energy output. The battery cell is the smallest unit of photoelectric conversion, and is generally not used as a separate unit. Power supply, the battery cells are connected in series, parallel and packaged to become solar cells. The power is generally a few watts, tens of watts or even hundreds of watts. Many solar cell modules need to be connected in series and parallel to form a solar cell array, which constitutes a solar cell. “Solar Generator”.

In Figure 2. IVD is the diode current, and its expression is shown in (2):
IVD=ID0[e(qE/AKT)﹣1]——(2)
In the formula, q is the charge of the electron, 1.6×10﹣19C; K is Boltzmann’s constant, 1.38×10-23J/K; A is a constant factor, generally 1 or 2: T is the temperature of the panel, ℃; E is the electromotive force of the battery, V.
From Figure 2 we can get formula (3) load current IL:
IL=ISC﹣ID0{e [q(UL＋ILRS)/AKT]﹣1}﹣(UL＋ILRS/RSh)——(3)
In the formula, Rs is the series resistance; Rsh is the bypass resistance. The two resistance values ​​are related to the internal material of the battery panel.
Since Rs in formula (3) is very small. Rsh is very large and can be ignored, we obtain formulas (4) and (5)
IL=ISC﹣ID0[e(qUL/AKT)﹣1]——(4)
UL=(AKT/q)ln{[(ISC﹣IL)/ID0 ]＋1}——(5)
From equations (4) and (5), the output voltage and current of photovoltaic cells are mainly affected by irradiance and temperature. In the short circuit experiment, when RL=0, the output current IL is equal to Isc; in the open circuit experiment, when RL→∞, the voltage across the battery can be measured as UOC.
The open circuit voltage of the photovoltaic cell is shown in equation (6):
UOC=(AKT/q)ln[(ISC/ID0)＋1]≈(AKT/q)ln(ISC/ID0)——(6)
It can be seen from the above formula that Uoc is related to the irradiance and temperature of the photovoltaic cell, and is inversely proportional to the temperature.
According to the engineering calculation method, formula (4) can be converted into formula (7):
IL=ISC{1﹣C1[e(UL/C2UOC)﹣1]}——(7)
In the open circuit state, the output current is 0. The voltage is Uoc: when the photovoltaic cell has the maximum power, the output current is Im and the output voltage is Um. Solutions have to:
{C1=[1﹣(Im/ISC)]e(﹣Um/C2UOC)
{C2=[(Um/Uoc)﹣1]{ln[1﹣(Im/ISC)]}﹣1 ——(8)
Considering the irradiance and temperature changes, the output characteristic formula of the photovoltaic cell is equation (9)
{IL=ISC[1﹣C1(e[(UL﹣DUL)/C2UOC]﹣1]＋DIL
{DI=α·R/Rref·DT＋(R/Rref﹣1)·ISC
{DU=﹣β·DT﹣RS·DI
{DT=T﹣Tref——(9)