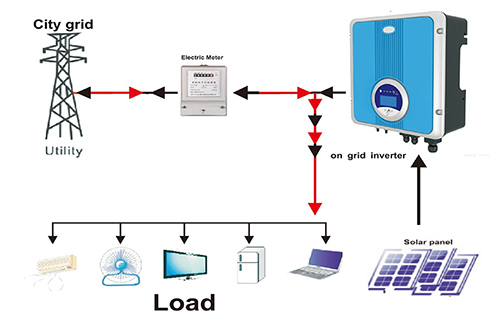 ①Design of micro grid-connected inverter
The following introduces a design example based on the series Nuozhen push-pull voltage micro-inverter. The circuit diagram is shown in Figure 1. The series-spectrum push-pull structure is mainly composed of two parts, namely, push-pull DC/DC converter and full-bridge DC/AC inverter, which are first boosted by the converter , And then carry out inverter and grid connection.

In the example, a 500W micro-inverter is designed with relatively small power, so the inverter function can be realized with MOSFET. Generally, 600V, 30A MOSFET can be used to meet the requirements. The high-voltage DC power is converted into 220V, 50Hz AC power through a full-bridge inverter circuit. The inverter circuit is shown in Figure 2. Four MOS tubes form a full-bridge structure, C2, C3, R1, R2, VD1, VD2 form an RCD buffer circuit to absorb the overshoot voltage component generated when the MOS tube is switched. The buffer capacitor can reduce the loss of the resistance, and the diode suppresses the parasitic oscillation. C1 and C4 ensure the reliability of the switch and can effectively suppress the change of du/dt.

The entire DC/DC converter part is jointly controlled by a single-chip microcomputer and a PWM controller. The complementary PWM wave with dead zone that controls the conduction of S1 and S2 can be provided by the PWM controller TL494. The single-chip microcomputer provides the sine square of 2 times the grid frequency. The wave signal is used as the current given value in the PWM controller to displace the output current of the booster circuit. The output of the transformer passes through VD1, VD2, VD3, and VD4 to form an H-bridge circuit rectified to obtain a sine half wave of twice the grid frequency. In the inverter link, the single-chip microcomputer first monitors the phase of the external power grid, generates PWM waves according to the phase control of the external power grid, drives the power devices in the full-bridge inverter circuit as power frequency switches, and the inverter outputs 220V AC power with the same frequency and phase as the power grid.

The experimental waveform of the design example is shown in Figure 3. It can be seen from the figure that the grid voltage has obvious harmonics at the peaks and valleys. Due to the disturbance of the grid voltage, the output current waveform of the micro-inverter appears at the peaks and valleys. Obvious distortion, meanwhile, the waveform distortion at the zero crossing point is also more serious. The distortion of the waveform will affect the normal operation of the grid and the quality of the grid, so it is necessary to add feedforward control to the inverter.

After adding feedforward compensation, the distortion of the output current waveform of the micro-inverter at the peak and trough is basically solved, and the waveform distortion at the zero-crossing point is also greatly improved. Because feedforward compensation is added, the current loop can quickly follow the grid, so that while observing the static characteristics, it also takes into account the dynamic changes. The waveform is shown in Figure 5.

Although the circuit topology is basically the same, the control methods are quite different. The DC output side of the push-pull off-grid inverter is a stable 400V DC, so the current setting of the PWM controller is a constant value instead of a sine square wave Signal, the driving signal of the power device in the full-bridge inverter circuit is the SPWM wave instead of the power frequency switch. The main circuit of the micro-inverter can be modified by adding DC support capacitors and solid-state relays for switching, and switching between the micro-inverter on-grid and off-grid can be realized through a certain control method. The schematic diagram of the modified circuit is shown in Figure 7.